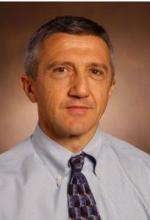 Dario is currently responsible for the Health Data Repository (HDR), the integrated repository of all patient data generated at Vanderbilt (from 1994 to the  present). Dario spearheaded the effort to implement three generations of the electronic health record (EHR) at Vanderbilt: the MARS system (1995), the StarChart system (1999), and the StarPanel system (2001). StarPanel was the first fully integrated, longitudinal patient record system at Vanderbilt that supported the full health care workflow for both inpatient and outpatient encounters, and supported the operation of the entire medical center until the fourth generation EHR (eStar, which is Epic-based) was implemented in 2017. Dariohas long-standing research interests in the application of computer systems to facilitate real-world work processes. He received an M.S. in Pure and Applied Mathematical Logic from Carnegie Mellon University and a Dr.Ing. ("Dottore in Ingegneria") degree from the Politecnico di Milano, Milan, Italy.